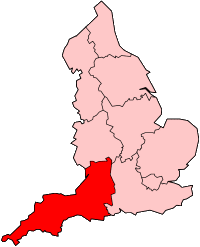 South West England includes Bristol, Gloucestershire, Somerset, Dorset, Wiltshire, Devon, Cornwall, and the Isles of Scilly. It is also home to the Stonehenge, magnificent Bath, and quaint honey-colored Cotswolds villages. It is a beautiful place to visit, with beautiful beaches and rolling hills of the English countryside. In the late summer of 2006, we set out one weekend with no firm plan along the motorway M5.

Now England is a little different from the US, particularly in the way directions on interstates, or motorways as they are identified. In the US, direction on the interstate is defined by direction - east / west or north / south. In England, direction is defined by the next major city in either direction. As we were headed to the M5 that morning, all we knew was that we had to take the M5 and the name of our final destination. That gave us a 1 in 2 chance of picking the correct direction.

We picked the wrong direction.

While we were blissfully roaring in the wrong direction, sniggering at the blokes that were stuck in traffic in the opposite direction, we thought we made good time traveling 40 minutes at the posted speed.

Then we realized our mistake.

40 minutes into our drive, we had to get off the M5 and switch directions, from the traffic-free wrong direction to the slow-moving correct side. Took us twice as long to just get back to where we started.

Undeterred, we pressed on.

Our first major stop was at King Arthur's Castle in Tintagel, with a brief stopover at the picturesque Boscastle village. Both Tintagel and Boscastle were beautiful if highly commercial and touristy. If not anything else, the drive to either place with its sharp curves along the road made the detour worth it.

Of course, given our late start, we were starving and nothing like a delicious lunch in a small town with easily accessible restaurants. The day was bright, and sitting outside was just what the doctor ordered to overcome the botched beginning of the day.

We continued through a major city in the area, Penzance, to a nearby fishing village called Mousehole. Despite its suspiciously profanity-like name, the place is a fine example of an English small town. Tiny cobbled streets, blind alleyways, and a beautiful natural harbor form the main attractions.

The plan had always been to return to Penzance to hole up for the night. But considering it was not sunset yet, we decide to cram another destination into the day's itinerary.

Land's end is the western-most point in mainland UK. Before America was discovered, it was considered the extent of land known to man - hence lands's end. There were surprisingly few people when we arrived, so we had the place all to ourselves. As the sun set in the west, it evoked a feeling of personal loss - as if something was going away never to return.

In addition to the lighthouse, pictured above, land's end is also known for its steep bluffs. Sunset provided a great opportunity to capture the splendid detail in the rocks.

As we finished up after photographing the bluffs, it was time to find a place to rest. While Penzance yielded dinner, we did not have much luck finding a place to crash. Giving up on Penzance, we decided to find something closer. But cold-calling B&Bs is never a good idea, especially not when you a tired from a day's worth of driving around.

After a fair bit of searching, we finally got lucky at a place called the Cederhurst Bed and Breakfast, in St. Ives, Cornwall. A good place to hang out, probably, but we were too tired to stay up for too long after checking in.

We began day 2 at the Porthemeor beach. Any beach in Cornwall is beautiful, and this place is spectacularly so. Considering we ended up pretty early in the day, also meant we had the whole place to ourselves. Turned out to be a great way to kill some time before the featured presentation of the day.

St. Michael's Mount is one of those must-see places in Cornwall. This was almost the reason we put together the trip. And it turned out to be all we expected. It is a castle, fortress and church, linked to the mainland through a narrow walkway that floods during high-tide. We timed our trip so that we could walk our way across, but have to take the ferry back.

There a number of stories about the place, each more fantastic than the other. But all said this is a great example of ancient ruins restored to their former glory in the pursuit of preserving a region's rich cultural heritage.

It was time to begin the journey back, but not before we visited the modern marvel of Cornwall - the Eden Project. The project is a set of massive greenhouses that house plants from a variety of climates, for the purpose of study and preservation. If the scale of the project does not blow your mind, the variety of flora contained within most definitely will.

Inside the domes we found everything from the touch-me-not plants to the cacti of the Arabian desert. Half a day does little justice to the place, but that is all we had. Soon it was time to leave.The Cornwall region of the UK turned out to be a beautiful and historic place to visit. Pity we had only a weekend to cover the whole place. But what we could not do in depth, the place certainly made up for in sheer variety.

There is a map of our trip available on Google Maps.